The Pilgrims were bound for Virginia, but the Mayflower was blown off course by several hundred miles.  Rather than staying close to the Hudson River, the seas forced them to return to Cape Cod.  They finally settled at what is now called Plymouth.  Had they arrived only three years earlier they would have been met by the Patuxet Indian Tribe, known to be the most violent and fiercest tribe in the region.  However, in 1617, the tribe died off because of the plague.

1621 Squanto Save the Pilgrims 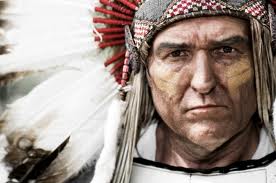 Squanto was the only surviving Patuxet Indian and the way he escaped the great plague demonstrates the providence of God for America.  In 1605, Squanto was captured by Captain Weymouth and was taken to England.

While in England Squanto learned English and in 1614 he returned to New England with Captain John Smith.  Smith intended to return Squanto to his people when he was kidnapped by Captain Thomas Hunt, who sold him as a slave in Spain.

Squanto was able to escape and returned to London were he met Captain Dermer who was on a voyage to New England in 1618.  Captain Dermer inteneded to use Squanto as an interpreter fro him with the Indians.  However, Squanto jumped ship and returned to his homeland only to find that his entire tribe had died one year earlier with the plague.

He traveled to the neighboring tribe of the Wampanoag close to Plymouth.  Once he arrived, he learned about the Pilgrims landing at Plymouth.  Fluent in English, he offered his services to the Pilgrims by teaching them how to plant corn and survive the cold winter.

Squanto converted to Christianity and Captain Bradford said that, “he was special instrument sent of God for the good of their expectation.”  Through his life of one Indian, Squanto, God was able to save the Pilgrims from destruction.

Commander Ducd’Anville, the French commanding officer, set sail on June 20, 1746, to capture the English settlements.  During the journey, they were first delayed by a calm in the ocean.  Then following the calm, the ship’s crew was sick with pestilence and they then encountered storms that disabled several of the ships and scattered the rest of them.  Only Commander Duc’Anville and his ship reached America.  He then set sail to the West Indies to rendezvous with the other French ships only to find they had left.

During this time, the settlers were praying and fasting for God’s deliverance from the attacks of the French.  Commander Ducd’Anville returned to New England only to become so discouraged that he died mysteriously very shortly after he arrived.  The commander who took his place committed suicide and between 2,000 and 3,000 men died of pestilence.  When the fleet decided to attack Annapolis, God allowed a deathly storm to complete the destruction of the fleet.

Surrounded by General Howe in Brooklyn Heights, General George Washington’s army escapes without firing a shot.  The British ground troops had Washington’s army surrounded, while the British navy closed in from behind.  In an act of seemingly desperation, George Washington tried to evacuate his troops by night.  Remarkably, a fog suddenly arose which covered the East River.  Through the fog, 8,000 American soldiers escaped on boats, sloops and anything else that could float.  While the British slept, the escaping 8,000 American soldiers were not seen because of the fog, but, even more amazing, was that they didn’t even hear the fleeing soldiers.

Luck?  Coincidence?  Accidents? I think not!  I still believe that God then and still is in control.